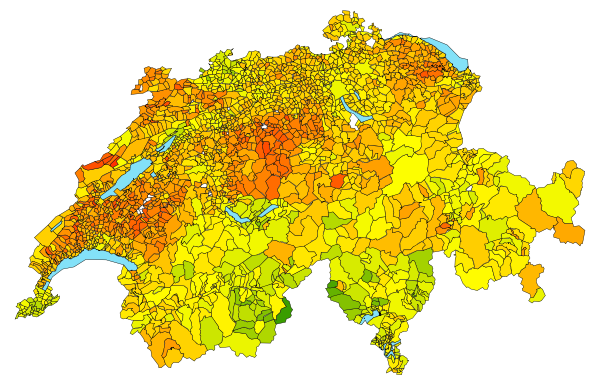 While votes seem to yield increasingly surprising results, such as the election of Donald Trump in 2016 or the Brexit vote in the UK defying pre-vote polls and initial vote counting predictions, Swiss vote results are swiftly being predicted by Predikon.

Predikon is a tool based on probabilistic modelling, large-scale data analytics and machine learning. This tool was developed by a team of researchers at EPFL’s Information and Network Dynamics Lab (INDY), in particular by the PhD student Victor Kristof and by the former EPFL Master student Alexander Immer under the supervision of Matthias Grossglauser and Patrick Thiran. The aim of Predikon is to better predict final election and referendum results from partial, early ballot counts.

Predikon is based on an article published by Victor Kristof and Alexander Immer  at the ACM Conference on Knowledge Discovery and Data Mining (KDD 2020), Sub-Matrix Factorization for Real-Time Vote Prediction. The algorithm relies on a combination of matrix factorization and generalized linear models to predict the results of votes. For each municipality, and for each vote, the algorithm learns a representation in an ideological space from historical voting data, and it fits a partially observed result to predict unobserved results.

During the previous national vote held on the 27th of September, at 12:01 Predikon predicted 38.53% in favour of the popular initiative “For moderate immigration”, and the final result, obtained at 17:02, was 38.29% in favour.

Last November, Switzerland voted on two new initiatives, “For a ban on financing war material manufacturers” and “For responsible businesses – protecting human rights and the environment”. This latter initiative did not pass, to the surprise of many, including Predikon. Pre-vote polls revealed that 63% of those surveyed were in favour of the initiative and within the first minute of the vote counting Predikon predicted that the initiative would pass with a tighter 50.13% in favour. The final result, four hours later, revealed that 50.73% voted in favour, highlighting a promising accuracy from Predikon.

However, the initiative did not pass despite the favourable prediction and results. This is due to the fact that in Switzerland, an initiative requires a double majority to pass. That is, both a majority in the popular vote and a majority in the number of cantons in favour of the initiative. In the case of the responsible businesses initiative, despite receiving a majority in the popular vote, only 8.5 cantons were in favour as opposed to 14.5 against the initiative. It was only the second time, in the history of modern Switzerland, that an initiative was rejected as a result of not receiving the cantonal majority. Unfortunately, Predikon did not take this into account and hence did not anticipate the surprising result. Therefore they are planning on implementing this change for the upcoming vote in March.

The algorithm can, however, still be improved. Victor Kristof has three objectives: to predict the majority of the cantons as requested for all changes to the Swiss Constitution, to compute margins of error of the predictions in order to quantify the uncertainty, and, finally, to make predictions prior to a vote day, i.e., before the ballot counting starts.

When making predictions, particularly in machine learning, the margin of error is a measure of how correct a value can be considered. The larger the margin of error, the less reliable the results are and the greater the likelihood that they will be deviated from reality. Few results resulting from algorithms are guaranteed to be 100% reliable, and Predikon does not offer here any nuance regarding the results – therefore a future improvement.

This article is the first in a series about Predikon. Read the rest of the story here: